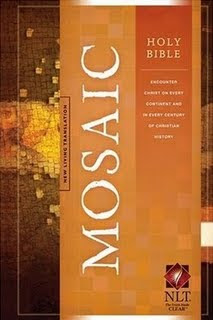 Keith's post is in response to Zach's question. He writes,

Throughout the process of creating Holy Bible: Mosaic, one issue that I was constantly aware of was the fact that many people who would pick up this Bible and think about using it were people who have not had a lot of exposure to much of the content. I grew up in an independent Bible church where things like the church year, historical theology, and other Christian traditions were not an integral part of my everyday church experience. Every few years the church would have some Advent candles in December, and occasionally a sermon would mention someone like Martin Luther or Augustine, but that was the extent of it. So I am keenly aware of the fact that many things in this Bible are relatively foreign to a lot of evangelical Christians.

When I went to Bible college and graduate school, I began to read widely from a lot of Christians that were very different from me. Many of them lived centuries ago, but some of them were contemporary Christians in Africa or Asia, and I learned a great deal about God and the Bible from seeing things through these diverse perspectives. It broadened my view of things, and showed me that I had a lot more to learn about God than I realized. We all have a lot to learn from one another.

Another important thing that happened in my spiritual life was when I first attended a church that followed the church calendar in worship. The first year that I was involved in this sort of worship was eye-opening for me. You will be amazed how different the rhythms of life feel when they are centered around Christ and his work in the world rather than the metronome of nature. Advent became more than just that hectic month before Christmas; it became a time of eager anticipation and longing for the coming of Christ. Lent suddenly had meaning, and the week leading up to Easter that first year was an intense time of communion with God. Easter was more full of joy. My entire spiritual life was renovated and deepened by reorganizing my calendar.

So, while I think Christians that are already following a church calendar will enjoy this Bible, one of my greatest hopes is that many Christians who have never really been connected to the church year will have a similar experience to my own by discovering the church year through this Bible. We did our best to give a very high-level introduction to the church year in the User’s Guide (p. m9-m12), and the website will provide more extensive material on the church year in the future. Also, because many of the voices included in the Mosaic will not be familiar to all of our readers, we identified each person with both a note about where they were (or are) from and when they lived. The Tesserae (p. m333-m340) give even more information so readers can find and read the quote in its larger context if they want to learn even more.

Also, everyone is welcome to come to the forum at http://www.holybiblemosaic.com/ to ask questions and learn from others who are sharing the experience of connecting with Christ through his people from around the world and throughout the centuries in Holy Bible: Mosaic.

Here are additional answers to your questions:

Mosaic can be used year after year because the content draws from a rich variety of
sources and has a level of depth that allows readers to have a different experience with
the material in response to God's Word each year. There are not specific plans at this
time to create new material for next year or subsequent years, but we are open to doing
that if Mosaic is well received. This isn't the first time someone has asked about it, so
maybe some momentum is building in that direction.

The back cover is the Apostles' Creed, an early ecumenical creed that is recognized in
virtually every Christian tradition. The word "catholic" simply means
"universal" and is not a specific reference to the Roman Catholic Church.

Thank you for the response... I have grown up engulfed in the conservative evangelical world. I have attempted to study some of the early Church fathers, but have not totally connected. I have tried to find something as an introduction to various early Church fathers that is a fairly easy read as I am certainly no theological expert, but a mere layman, so to speak.

Looking forward to being able to read this devotional literature and to take a look at the NLT translation.

Again, thank you very much for your response...
Zach

Great post Keith. I've also never followed the Church calendar at all, but I can definitely see the value in doing so. I"m excited to utilize Mosaic over the next year.

When do you anticipate the forums actually working? As of now, registering only returns you to the main page.

Hopefully we'll have these bugs worked out very soon.